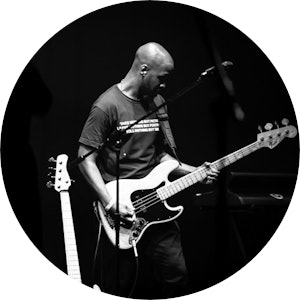 For the past seven years he has rocked international stages with Who’s Bad, (The Ultimate Michael Jackson Tribute Band). Darion and has spent countless hours in the recording studio as well as performing live with an array of artists in various genres including Former contemporary gospel Artist, Tony Terry, and funk soulstress, Yahzarah (aka Purple St. James) ,and Zander Bleck on the a song tittled "Home away from home" coming out soon. Performed with RAKIM at the 2017 Art of Cool Festival (Durham NC) ,

If his impressive list of performances isn't enough, Darion also co-produced the song entitled "Politics and Fashion" by the group PHIVE which made season 4 of the hit show "Jersey Shore.” You can hear Darion’s most recent work ; Jean Morisson’s new studio recordings, "Beauty in the breakdown" and "Always Be Around " by the group PHIVE. Kim Arringtons new album "Getting II Yes" ,

As a proud endorser of Lakland basses, and Dark Horse Bass Strings : Darion's a dynamic “musician’s musician”, with an ability to accommodate any songwriter or producer’s challenge.

Through 20 years of experience, Darion has honed his skills as a crowd-pleasing bassist, where his love of performance is evident. His engaging smile and stage presence continually motivates crowds while his ease and style demonstrates his ability to remain in complete command of the groove.

Darion's openness to all genres as well as his talent and passion for music leads him to a variety of musical experiences around the globe. As Darion puts it, "Have bass..will travel." and "It's about the Music"