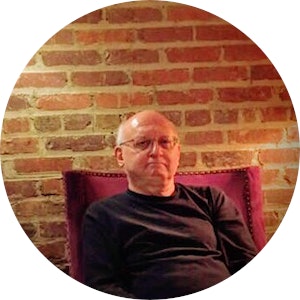 Tom Ray was born in Raleigh, North Carolina and grew up fascinated by aviation and technology. By the age of 13, he had already taken his first flying lesson, flown model rockets, and learned computer programming. Severe childhood burns ruined his dream of becoming an astronaut, and lead him to focus on the science. Tom also began writing science fiction at that time, which coincided with the first moon landing in 1969. Tom spends most of his time writing, listening to Two Steps from Hell, keeping up with physics, astronomy, and space technology, and catching movies with younger fiends. He can often be found at Imurj Artists’ Café with the Raleigh PubWriters.

Tom attended North Carolina State University, originally to become a writer. Disillusioned by poor prospects of making a living in journalism, he turned to engineering and technology, finding it to be his forte. His career moved between aviation, nuclear power, instrumentation, high-tech construction management, and ultimately arriving in IT as a database developer and one of the first webmasters in the early 90’s.

A lifelong battle with depression lead to medical retirement in 2010. Ultimately, his passion for writing science fiction was based upon a lifetime of experience seeing first-hand the impacts of technology changing society. These experiences became the solid foundation for his writing. In 2013, Tom ultimately decided that he could not wait another 40 years to follow his dreams, and he began research for the Histories of the Exodus series.

In 2014 Tom began expanding upon a theme dating back 40 years. The story had matured to be much deeper and darker, delving into an understanding of hope, loss, people, conflict, life, and the question of existence and faith after letting go of religious definitions of what it meant to be alive. The first books of The Histories of the Exodus series explore these questions in an alternate setting resembling today’s society in a way to make them pertinent to how we now live and where find ourselves heading as a society.

His lifetime creed has been “Everything is significant” based upon a quote by Henri Frederic Amiel:
“What we call little things are merely the causes of great things; they are the beginning, the embryo, and it is the point of departure which, generally speaking, decides the whole future of an existence. One single black speck may be the beginning of gangrene, of a storm, of a revolution.”