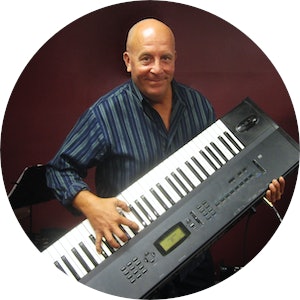 Keyboardist/Guitarist Doug Kōbs was accepted into the classical piano program at Lawrence University in Appleton, WI, but switched to jazz and ultimately earned a degree in Jazz Performance from the University of North Texas in 1989. While studying the piano, Doug also honed his flat picking and finger style guitar technique.

After playing around the Dallas/Ft. Worth area, including a stint with the jazz/R&B group Fingerprints, Doug headed to Denver, sitting in with local and national jazz artists at Denver’s Market Street jazz fixure, El Chapultepec.

In 1995, Doug hit the Big Apple, where he regularly joined the late night jam at Manhattan’s famous jazz hangout Small’s on 10th Street in the Village. As multi-keyboardist for the Prog Rock/Alternative band, The Zipperbits, he spent the next few years gigging at such New York hot spots as CBGB, The Mercury Lounge and Arlene’s Grocery.

After 14 years in New York, Doug relocated to Raleigh, where he is currently the keyboardist and webmaster for the funk/reggae/dance band BIGFooT GRooVE. Doug is also the keyboardist for the Motown/classic rock group West Street Band, and has regular solo jazz piano gigs at Brasa Brazilian Steakhouse in Brier Creek and the Empress Room and C. Grace in downtown Raleigh on South Glenwood. He also performs jazz regularly throughout the Triangle with his “musical soulmate” Peggy Hayes, one of the Triangle’s premiere jazz singers.