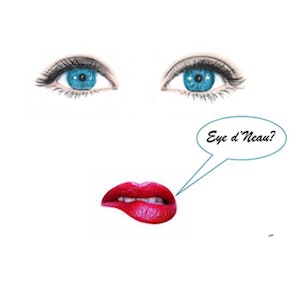 Eye d'Neau is an enigma, wrapped in a mystery, shrouded in a fog. He was born the child of a prince and princess living in the Duchy of Raphe Magnus, which lies on the shores of the Aqueduct of Sylvius, just north of Locus Coeruleus and east of Substantia Nigra. Eye d’Neau learned to play guitar at a young age in the central part of Amygdala, which is just a short trip on the Stria Terminalis to its Bed Nucleus. Unfortunately, when Amygdala came under control of the evil Judges of the Prefrontal Court X, music was banned. Eye d’Neau was arrested, transferred to Purkinje in eastern Cere Bellum, and imprisoned in a Purkinje cell. Luckily a good fairy, Oxytocin, was sequestered in a terminal of the purkinje cell and was magically released when she heard Eye d’Neau singing. Oxytocin then enchanted the dopey Amine Guards of Accumbens which caused them to intimately feel Eye d’Neau’s pain. They then overthrew the Judges of the Prefrontal Court X and freed Eye d’Neau, which brought pleasure to everyone in Amygdala. However, Amygdala became so dependent on the dopey Amine Guards and Eye d’Neau for their pleasure, that they would not let Eye d’Neau leave. Oxytocin again came to the rescue and travelled along the Solitary Tract to visit Vagus, the Keeper of Satisfaction. Vagus gathered his forces and had an intervention to withdraw Eye d’Neau and the people of Amygdala from the clutches of the dopey Amine Guards. And, the people of Amygdala learned to be mindful of the satisfaction brought to them by Vagus' activity. Vagus then placed Eye d'Neau in Raleigh, NC, where he currently resides.

Eye d’Neau plays a banjo-influenced ,country-jazz fusion style of music with hints of heavy metal and New Age hip-hop. So far, all but 3 of the 35 songs I uploaded to Imurj Radio were recorded live, just 2 tracks (guitar and vocal), straight from my PA pre-amp into GarageBand on my MacPro or iPad. I like multi-tracking, but people need to hear me "in the raw" to know what I sound like live, I hope to be able to afford Imurj's studio rates so I can start to upload higher quality. IMURJ, make me a STAR!