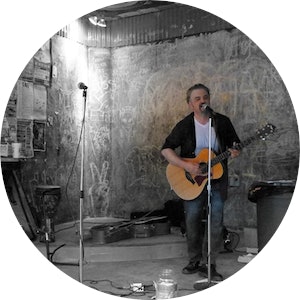 Born in the same small West Virginia hospital where Hank Williams was pronounced dead, Anthony Neff grew up listening to equal amounts of rock, country, folk and pop. Skirting around the edges of each of these musical styles, he has been compared to artists as diverse as Elliott Smith, the Band, Donovan, the National and Little Feat. Running throughout his work is the knack to craft words and melodies that linger with the listener long after the song is over.

His latest recording, Blood Beneath the Sun by Anthony Neff & The Nearly Distants (release date – Sept 22, 2015), continues in this tradition. Recorded at Overdub Lane studios in Durham, NC, the record seamlessly incorporates elements of indie rock, Americana, soul, pop and folk into a set of songs that are his strongest to date. Each track is part of a slice of life in one year of a relationship, covering the highs, lows, and points in-between.

Anthony began writing, performing and recording music in 1999. Since then he has released three CDs prior to his latest (Between the Rungs, Chase Your Burden and Generation X-istential Blues), was featured in a compilation from Shut Eye Records, two editions of Holly Raleigh Christmas compilations, and landed a song in the top 10 of Neil Young’s “Living With War” website.