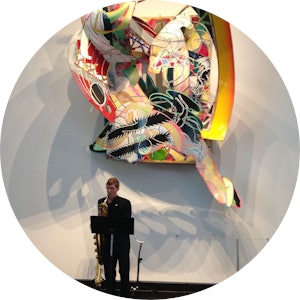 Originally from Michigan, Nicolas has spent the last ten years building connections and performing throughout the United States. Active as a performer, teacher, and scholar, Nicolas explores a wide range of musical genres, stretching from classical music, to jazz, pop, and punk. His recent performance projects include Trio Spiritus, a collaboration with Zak Pischnotte and Fanny Po Sim Wong, the solo electroacoustic works of Jean-Claude Risset, a French researcher and composer, and E.N.F., a new music ensemble based in Lawrence, Kansas. He constantly strives to expand the audience for the saxophone and contemporary music.

Solo and chamber music performances have taken Nicolas across the United States, including national and regional meetings of the North American Saxophone Alliance, and a summer at Brevard Music Center. He was a founding member of the Neo Saxophone Quartet, Kansas City Saxophone Quartet, and Trio Spiritus. His passion to promote the music of living composers has led to work with the newEar ensemble in Kansas City, and COLAPSS in Greensboro, NC. As an orchestral saxophonist, Nicolas has performed in the Kansas City Symphony and the Brevard Sinfonia.

Nicolas holds degrees from Michigan State University, and the University of North Carolina School of the Arts. His past teachers include Joe Lulloff, Taimur Sullivan, and Zach Shemon. He was fortunate to continue his studies at the keyboard until age 21 with Minsoo Sohn and Dr. Derek Polischuk at Michigan State University. He is currently ABD at the University of Missouri – Kansas City, where he will be completing his DMA degree in saxophone performance and a MM degree in music theory.

Nicolas’ recent scholarly work in music theory analyzes the influence Hardanger folk music on Edward Grieg’s piano work Slåtter, op.72. He has also written about Jean-Claude Risset’s works for saxophone and fixed media. He regularly appears at conferences in the USA and abroad to perform and share his research.