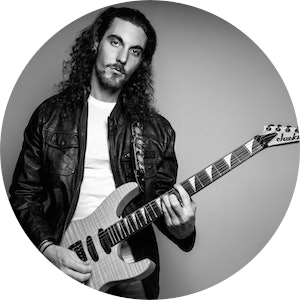 Hailing from Durham, North Carolina, Apparitions Of Myself is a dynamic indie rock artist drawing on 10 years of experience writing, recording, and performing original music. Behind the apparition, the project is backed by Justin Eyster, a skilled multi-instrumentalist and professionally trained vocalist from Selinsgrove, Pennsylvania. In his artistic endeavors, Justin goes by the alias “Dallas Casper.”

Dallas first took the stage when he was 14 years old while volunteering for community church bands in his hometown. Just three years later, classical voice training led to his participation in a choral performance at Carnegie Hall under the renowned English composer John Rutter, where Dallas stood in the footsteps of legends like Bob Dylan, Elton John, and The Beatles.

Apparitions Of Myself quickly strayed from these religious and classical roots, evolving from the simple acoustic love songs of I Give You My Life (AOM’s debut EP released when Dallas was 16) into dark psychedelic indie soundscapes backed by rock and electronic instruments, and thematically covering counter-culture ideas like drug use and polyamory.

Apparitions Of Myself’s stylistic shift into more rugged thematic landscape occurred after a few years of low-activity while Dallas attended Bucknell University for engineering. After this brief hiatus, Apparitions Of Myself released its most critically acclaimed work to date entitled Tripping With The Lights Off in 2017. This 6 song release was inspired by Dallas’s experiences traveling European cities like Edinburgh, London, Paris, and Amsterdam, as well as the American music hub of Austin, Texas.

Tripping With The Lights Off, Apparitions Of Myself’s sex and drug fueled fourth release, was produced by career musician Adam Stehr, currently of Gramatik, and gained the attention of several indie music publications like New Indie Daily and Emerging Indie Bands. It also received international radio airtime, primarily for the innovative and mysterious hit single “Impulses.”

Today, Dallas is a 25-year-old college graduate dedicating extensive time and resources to Apparitions Of Myself. The project is newly based in the “triangle” area of North Carolina, where there is a particularly active music scene compared to the project’s roots in rural Pennsylvania.

Having these new and promising opportunities in-hand, Dallas returned to Adam Stehr’s recording studio in February, 2019 to create Apparitions Of Myself’s 5th release entitled Lucid Dreaming. While managing to remain simultaneously cohesive and eclectic, Lucid Dreaming keeps listeners on the edge of their seats with a volatile story of love and anguish that continually provides glimmers of light and hope but never complete emotional gratification.

With this upcoming 7 song album and a lineup of local shows on the horizon, Apparitions Of Myself will demonstrate its artistic devotion with the humble aim of becoming “your favorite solo act in the triangle area.”