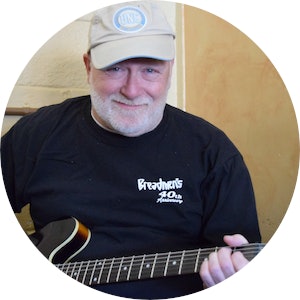 Kenneth Anderson (who goes by the stage name Adam) was born in 1953 in Springfield, Massachusetts. He studied classical piano at the Springfield Conservatory of Music from age 14-17. Adam's first band experience was in college, as a drummer, touring mill towns in rural Massachusetts in a quartet that specialized in performing Greek war dances from the isle of Crete.

After moving to North Carolina at twenty one, Adam picked up the guitar and practiced six to eight hours a day. He soon joined The Foggy Headed Boys, a bluegrass jam band that played in central North Carolina. Adam quickly turned his focus to songwriting, which spawned several video and recording ventures, including the hour-long performance video "Ken Anderson and the Ulnasonics Live at The Station (in Carrboro, NC)," which debuted in Baltimore, Maryland. He also made several musical guest appearances on the variety show "The Continuous Train Wreck" on a public access station in Chapel Hill, NC. Adam's song "I Am That I Am" was featured in a 2002 independent film "Three Short Films of Frustration," which debuted at the Carolina Theater in Chapel Hill, NC.

Adam has been writing and recording music for over forty years, and lately has penned two songs, "Fire and Ice" and the rap-laden guitar anthem "Brightness of Days" with local poet Paul J. Leboeuf.

Adam would like to acknowledge the valuable contributions of the late Rick Williston, a longtime friend and innovative collaborator during the duo days of "The Adam and Rick Show." Rick is the lead guitarist featured on "Walk on Water" and "Closer to You."