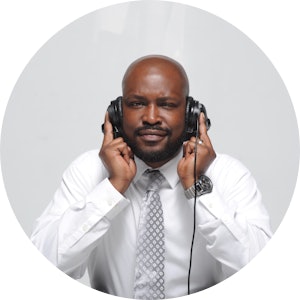 Born and raised in Philadelphia, Pa., TracStar Rich developed a passion for music at the young age of 13. He joined the Turner Middle School Band in the 7th grade. Rich learned the many nuances of the trombone and the piano. He then took a deep interest in learning the composition of music.

Rich then delved into and began to study music’s technical aspects. He acquired deep knowledge regarding the melodic arrangements of tones and pitches. Next, he developed a keen awareness to recognize the relationships of intervals and chords that make up harmonies. Rich became an expert on how lyrics should be expressed at the right timing of the beats. As Rich would say, “I just couldn't seem to get enough.”

His aforementioned education ignited a new found passion that inculcated within the recesses of his heart. Rich’s new obsession was music production. This became so strong that Rich knew this was what he wanted to do as a career. “When I started to see my cousins produce tracks. From then on out I was a full blown addict.” His cousins were of course, were members of the critically acclaimed Hip Hop group, “NAAM Brigade.”

Rich, figuratively, lived and breathed sound production and to him it is a fascinating art that one must have a deep desire for to be proficient at. He has intense drive to perfect a musical project no matter how long it takes or how difficult the task. Rich founded "TracStar Music" to fulfill their enterprising goals as a musical producer.

Some would say that "he's meant to do this.." as he defeated death in 2006, following a mysterious accident in Marine Corp Basic Training. With the astute abilities of Rich and his visionary goal of perfecting audio production, nothing short of excellence is in store for this young man. TracStar Music is destined to make tremendous inroads within the music industry. The spark that was once lit is now growing into a roaring conflagration. GOTTA LOVE LIFE. TAKE NOTHING FOR GRANTED...