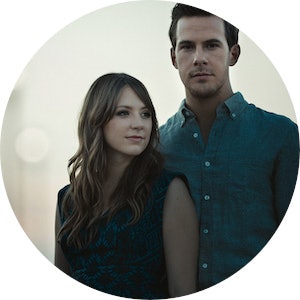 “When we first started out we would travel to any city where we had a couple of fans. We even drove out to play a show for one person in their living room. That’s how we learned to perform and to connect with people. When you’re regularly playing for three or four people, you can’t hide. You’re exposed. You have to learn to engage.”
—Tyler Somers

“Our approach is just telling our own story.” —Jenny Somers

Jenny & Tyler
Of This I’m Sure

By the time indie art pop duo Jenny & Tyler made the move from Delaware to Nashville and signed on as the flagship act for upstart label Residence Music, they had already won a dedicated following of fan-friends by criss-crossing the country on their own and then touring as the opening act for Sara Groves. The move to Nashville, when it finally came, wasn’t so much about a change of scenery for the talented, young songsmiths as it was about committing everything to music-making as a vocation—an “all the eggs in one basket” gamble to pursue a career as artists.

And speaking of eggs, chickens did figure oddly into that decision.

“There are more chickens than people in the state of Delaware,” Jenny laughs, “so as much as we love our little home state, the music scene there is a bit limited. You can only grow so much. Tyler had just been offered a sales job with a local tool company. But then he came to me and said ‘I can’t do this.’ It sounds like a small thing, but that was the pivotal moment. It was scary. With that decision, we knew without saying it that this music we had been chasing was really going to be our lives, whether it brought security or not.”

Now, with the release of their first label project, Of This I’m Sure, that gutsy decision comes to fruition. Jenny & Tyler’s unexpectedly mature sound melds a diverse set of influences into something new that is at the same time both yearning and comforting. Throughout the project’s twelve songs, their easy voices blend in harmonies that suggest a deep hope and a deep ache intertwined. Artful without being pretentious, Of This I’m Sure seems to have its deepest roots in the influences of lyrically emotive, UK folk-pop stylings. Even as Jenny & Tyler’s vocal pairings take center stage, the song production remains vast and lush, and at times, soaring.

“We’ve been writing love songs from the beginning,” Tyler explains, “though they’re not all stereotypically romantic. We see songs of friendship and social justice and the divine as love songs too. They’re all about the passion and connection of relationships with people we love. So in that sense, Of This I’m Sure is really a collection of love songs, and love is such an inexhaustible theme. We wanted the whole album to have the feel of an ocean. We wanted it to be layered and full in a way that would compliment the words we were singing. We were thrilled with our producer Gabe Scott’s ability to take us there.”

The album’s first single, Song For You, is a haunting entreaty of unrequited love that begins in sparse simplicity and steadily builds to a vast crescendo of emotion. “We’ve been writing more songs of brokenness like this recently,” Jenny explains. “A lot of these songs tell the story of a specific person—they’re actually written for people we know. When people in your life are in pain, you grieve for them. You feel the hurt when they make choices that are self-destructive. You just want to bring them close and embrace them, but sometimes pouring that emotion into a song is the only outlet you have to express it.”

The songwriting chemistry that exists between Jenny & Tyler goes back several years to their college days when they first met on a bus and started backing each other up as solo performers. Nowadays when they write, one of them will typically start an idea, and bring it to the other for completion. Melodies and lyrics become a shared creation.

“We’ve made a safe place,” Jenny says, “where it’s okay to really be honest in our writing together.”

“We’ll delve into depths of darkness and despair at times,” Tyler agrees, “but there’s always a light in there as well. The key to our writing is that we’re always really deliberate about telling the story of the lyrics through the music. If the line is a question, we make the melody uncertain. If the mood is happy, we paint it in a major scale. If it’s dark or yearning, we want the track to communicate that same emotion. A song doesn’t feel complete to us if it doesn’t do that.”

The darkest and most musically intense cut on the project is probably the pleading epic My Dear One, a pained invitation to a loved one who has turned their back on those who long to restore them.

“We really process life through songwriting,” Tyler says. “It’s how we deal with hard things, and I guess it’s a way to keep people in our minds and hearts. My Dear One has this tense interplay of sweetness vs. darkness, and you hear that tension reflected in the call and response contrast between the strings and the electric guitars.”

While most of the songs on Of This I’m Sure reflect some kind of internal tension, not all of them are dark. Walk With You came as the result of “years of attempts to write a non-cheesy friendship love song,” Tyler explains. The track is a piano driven pop song that utilizes wide swings in dynamic intensity to communicate the message.

“Walk With You has gentleness and intensity in the same song,” Tyler says, “because it’s about a commitment to walk with a friend through some really hard times, and it’s about speaking the truth directly. Loving and being loved isn’t always easy. There’s an intensity of commitment that’s required even to keep a real friendship together, and that’s what we were trying to capture in this song.”

“You want to protect them,” Jenny says, “but you can’t. What you can do is hold them and teach them and love them, and walk through those difficult places with them. This song is kind of a promise. Sonically, it has a sort of ‘old west’ feel to it like a glowing sunset. It conjures up images of open spaces, of loneliness. But there’s also this strength and comfort and commitment of us saying that no matter what, we’re going to be there for them.”

Though Jenny & Tyler agree that their previous indie release, Faint Not, is the one that really marked the beginning of their careers, they both see their official label debut with Residence Music as a huge step forward.

“We’ve been doing music independently for seven years,” Tyler explains, “ and didn’t know if it would ever make sense to sign with a label. But the people who started Residence Music have an artistic vision that matches up perfectly with our own. They want to make music without boundaries, and that’s what we’re all about too. It seemed like a perfect fit.”

“They’re taking artists that don’t fit in a box,” Jenny adds, “and trying to help them flourish. The bottom line is, we trust the people at the label. We believe that they can take our vision as artists, and help translate it into something even bigger.”