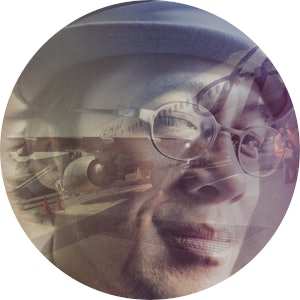 Clark Hipolito has been a fixture here in North Carolina since the early 90’s. Before moving to the Carolinas, Hipolito worked at MTV in New York where he learned a broad range of art + design talents. In 1994 he went on to start his own design firm, The Art Company Inc., based in Raleigh, North Carolina where his main focus has been on original art, murals, specialty finishes, + award winning commercial interior designs.

In 2004 the NHL commissioned him to create a large-scale installation for the NHL Draft. The piece titled “Transition” was mounted in the PNC Arena, home of the Carolina Hurricanes. The Hurricanes hired him again to create a 40’ mural installation as part of the new Rex Cardiovascular Hospital in 2016. Hipolito painted a vibrant and challenging 100’ mural on perforated steel as part of the rooftop area of the same building earlier that year.

His work has been seen nationally on television shows like HBO’s "Sex in the City", WB’s "Dawson's Creek", “One Tree Hill”, “Christmas Cupid”, and “Single Ladies”. His wears appeared in the movies “Zombieland” (starring Woody Harrelson), and “The Joneses” (starring Demi Moore, David Duchovny, and Amber Heard).

In the wine industry, Hipolito has found success designing wine labels and bottles for a number of prestigious wine makers, including one for the 2012 Triangle Wine Experience. The custom etched bottle is a behemoth 27 litre “Primat” which contains a blend from 27 of California’s elite winemakers. The custom bottle sold for $23,000