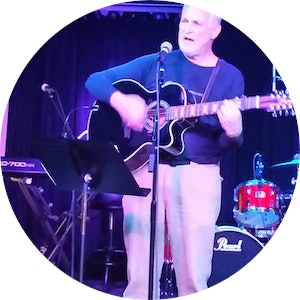 Rob has been playing guitar and piano, and singing, for over 50 years. The thing that all his songs have in common, regardless of genre, is soulfulness. The fullness of his 12-string and his wide-ranging voice do justice to hundreds of songs. Rob is resurrecting the original songs he penned some 40 years ago; meanwhile, you'll be pleased at the material he digs up. It defies categorization and tends to be heavy on melodiousness and rhythm. He started off during the '60s folk revival, influenced by parents who treasured their 78 & 33 rpm recordings of the likes of Woody Guthrie, Leadbelly, Josh White, the pre-silly Burl Ives, Pete Seeger, Joan Baez & Richard Dyer-Bennet. Before he knew it he was swept up in the excitement over the Beatles and the "British Invasion," and was exploring rootsy rock and, influenced by his Philly roots, R&B.

Rob did the obligatory duty in a high school rock & roll band and, taking a break from college, had the time of his life busking in Paris. Post-college he returned to Paris to busk, and in the mid-'70s was a fixture of the bar/club music scene in Chapel Hill & Durham, NC. Next thing he knew he was up to his ears in community organizing, where the dozens of protest/topical songs he knows landed him before audiences concerned with social and economic justice issues. That work led to a joint degree in law & city planning, and a career as a "white hat" environmental lawyer that has spanned 30 years. Plunging back into a life where music again plays a large part was long overdue, and today he loves nothing more than sharing his tunes with folks.