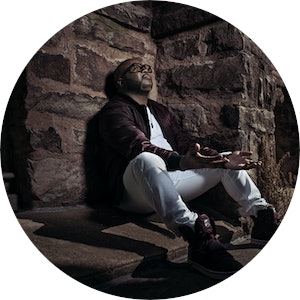 It is true that even at our lowest times, God still steps in and proves just how merciful and powerful he is. For singer JL, his low period seemed to have started at adolescents and lasted all the way into his adult hood. Molested at the young age of seven years old, JL would suffer from low self-esteem for much of his childhood. As he grew older, he turned to drugs and alcohol to help numb the pain. Homeless lost and empty, JL turned to God for refuge. After giving his life to Christ, he was reintroduced to his God given gift; music.

JL has a reason to celebrate and his music reflects the joy in his soul. His single Surrendering (Remix) shows him in absolute gratitude of God’s grace. This is not your average “Gospel” sound for he is singing on top of a mainstream Dance – EDM beat. Throughout the verses, JL reflects on just who God has been in his life. He names off attributes like “wonderful”, “beautiful” and “almighty God”. Knowing JL’s testimony, you can tell that the song is very personal to him. He remembers where he once was in life and knows that it was nobody but God that brought him out. The chorus simply says;

“You’re everything to me. You’re the air I breathe. And I believe. You rescued me”.

He goes on and puts the listener right at the very moment where he became saved. This was a very monumental moment in his life. You can picture him with arms out stretched as he sings with great power;
“I give you my everything. To you my heart I bring. Right here in this moment Lord. I’m surrendering”.

This is a familiar scene that many people with a testimony have experienced and can relate to.

JL has made sure to share his story and become a beacon of light in other areas other than the entertainment industry. Not only is he a motivational speaker and peer educator, in 2013 he became an advocate for those who are living with HIV/AIDS. His ministry moves outside of the church and meets those right where they are. With his music and advocacy, JL doesn’t hold any judgement of the circumstances of others. He is a singer of the people. He has walked in their shoes and wants to assure to them that there is hope. He is a living breathing witness of God’s love.

JL’s Surrendering (Remix) and other music can be found on iTunes, Spotify, Amazon, and CD Baby Music Store.