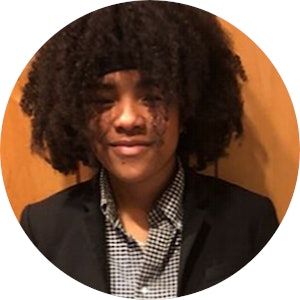 RalphGotStacks is an Emmy ® Nominated lyricist/rapper. She began writing poetry 12 years old as a way to express her feelings about the challenges she faced during her youth. As a freshman at Enloe Magnet High School, RalphGotStacks was afforded the opportunity to engage with a host of other talented area teens and dive into the artistic culture of the school. With the help of school mentors and other students she began the process of developing her poetry into lyrics for tracks with a R&B and Hip Hop vibe.

At 16, RalphGotStacks released her first track, “Stars (Déjà vu Remix)” on SoundCloud. This was followed by “Tunnel Vision” which caught the attention of not only her fellow students at Enloe, but also teachers and others in the community. This new exposure lead to her writing the track “Chains” which was produced as the music video “Chains/Be Free” and submitted by Enloe High School for a Regional Emmy ® Award in both production and writing. A shining example of her style of “fun, but intelligent and honest hip-hop”, RalphGotStacks says that she wrote Chains after observing the violence and struggle of minorities in the US both currently and historically. Her deeply personal observations continued on her next tracks “Closer to my Dreams” and “Cupid’s Dirt”. Never failing to add some levity to her work, the track “Cut it Up” has become a fan favorite.

RalphGotStacks performs at community events, on local radio stations and is also the host of Epic—a open mic night for area teens. She is from Knightdale, NC and the proud niece of one of her mentors, Dasan Ahanu, Artist in Residence at St. Joseph’s Historic Foundation in Durham, NC.